Posted on January 3, 2017 by actioncommunitytheatre 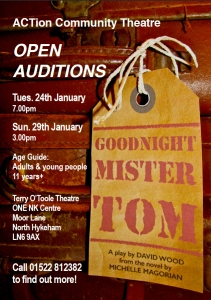 The roles of Tom Oakley, William and Zach will not be doubled, but as some of the characters are small cameos, there is scope to double roles.
Other than Tom, William and Zach, all actors will also play ensemble.

Lively community theatre company in residence at The Terry O'Toole Theatre, North Hykeham, Lincolnshire. We stage three shows each year: a Christmas show or January pantomime, a family-theatre piece in Spring and a Murder Mystery every Autumn.
View all posts by actioncommunitytheatre →
This entry was posted in Uncategorized. Bookmark the permalink.